You are here: Home / Celebrities / Cannes 2012: Speechless over Sonam

I am not going to say anything about this Red-Riding-Hood-meets-Little-Bo-Peep-meets-Princess-Mia look showcased to brilliant disastrous-dom by Sonam Kapoor at the Winners Dinner on the last day of the Cannes Film Festival. I am not. I am not. I am not. I am not. Except, maybe to point out that red velvet is probably not the right texture for a pouffy dress, especially in summer (actually, this would be equally disastrous in winter as well, so that’s redundant). Or to say that grown-up women should know whether or not pouffy dresses suit them at all – there is maybe 0.01% of the world’s female population above the age of four years who can pull off this silhouette and Sonam is clearly not part of that group. 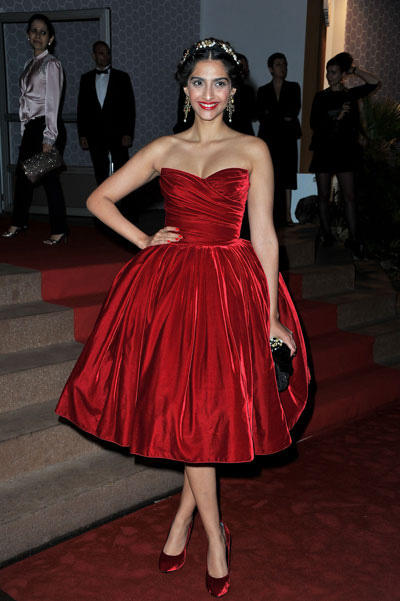 Another important thing that grown-up women should know: dressing “designer” is not always the same as dressing well (this confection is from Dolce & Gabbana, just in case you were wondering!). Oh! And I will just take the liberty of pointing out those red velvet slippers and glittery headband-cum-tiara… in case you missed them and hence would remain perpetually bereft of style ideas on how to dress up like an overgrown cupcake. That’s it from me. I am going to be seeing this dress in my dreams today – and definitely not in a good way. If this is what Red Riding Hood wore to meet her grandmom, the big bad wolf would have run away screaming in abject terror!