Awwww… Vidya Balan is just sooooooo sweet. She could have simply stuck to the dull-drab-frumpy wardrobe choices of yesterday but then what would we have added to add to the discussion? So, she very graciously went the extra mile and brought a whole new set of interesting stuff from a  Cannes boutique for today’s outing. 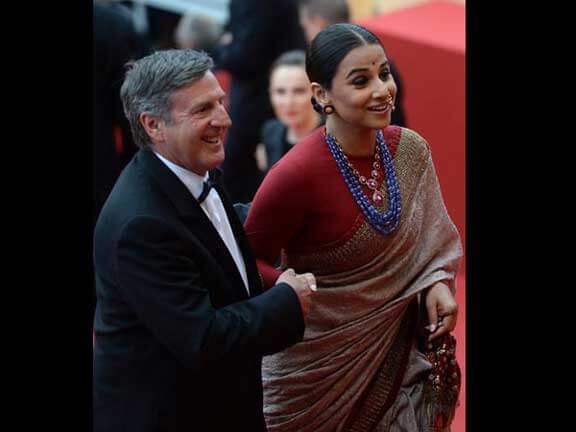 Which is why, along with the upholstery-material sari in an uninteresting shade of peach (I really want to get into Sabyasachi’s mind right now and figure out what’s going on there!), most unflatteringly designed blouse, severely scraped back hair that makes her look 20 years older, makeup that leaves her complexion looking muddy and the strange every-tiny-inch-shall-be-covered-up aesthetic, we now also have the pleasure of a completely out of place Maharashtrian nath (nose ring), necklaces that seem to have been made at home and multiple layers of completely mismatched jewellery.

Sigh! Vidya, you first need to take a deep breath and figure out what look you are aiming for at the Cannes Film Festival this year: Warrior princess a la Jhansi ki Rani? Dowager maharani? Something out of a Raja Ravi Varma painting? Matronly school mistress? An 18th century villager? Someone who is so resourceful they can create entire outfits with just the hotel bedspread and curtain beads? Taken independently and out of context, each one of these looks would be an awkward and inappropriate choice for this platform. Taken together – like you seem to have done – is traumatising. 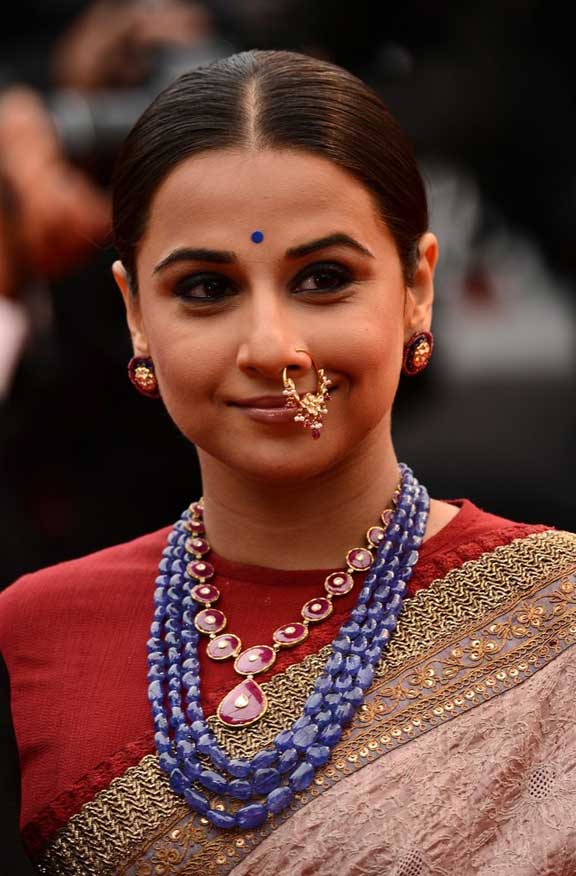 As for that nose ring… I beg all of Bollywood! Please, please, pretty please, lose it NOW. If you do want to/need to wear a nose ring to ease the pains of childbirth and menstrual cramps (which is their real purpose in Ayurveda), you can stick to a simple diamond pin. Like Sonam Kapoor’s nath yesterday, this one is just a plainly strange size: too big for formal wear and too small for a bridal look.

And the rest of that jewellery… in which dimension of thought did you visualize the red necklace working well with the strings of blue beads? Really? And the earrings? And the nath? Would it be too much to hope that you’ll just take the next flight and come back home? You’re breaking our hearts Vidya. Don’t do this… just… don’t.

PS: And just in parting, for everyone who is trying to channel royal splendour at Cannes (or otherwise), this is what one of our true royals looked like at the same festival a couple of years back. Kitschy designer costumes, cliched “earthy” makeup hues, ethnic nose rings and OTT-meets-tacky accessories don’t make an “Indian” woman. Elegance, a sense of what works well on you and being able to adapt to your environment while remaining true to your own self does. 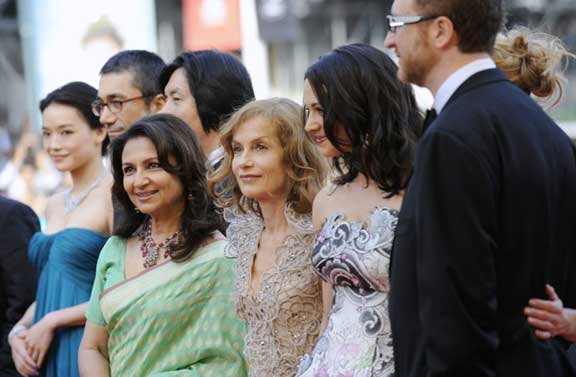 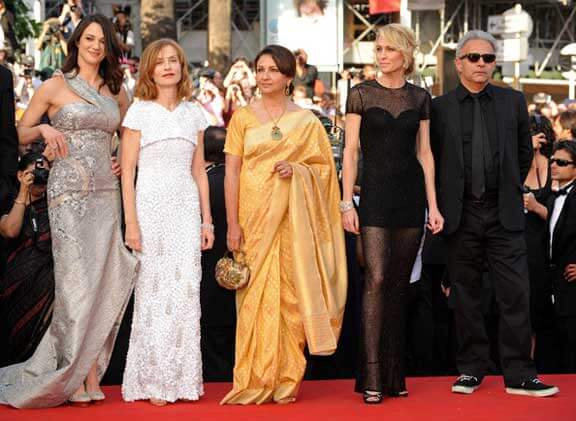