You are here: Home / Makeup / The Christmas beauty countdown begins

Does anyone else feel that 2012 has sped by way too fast? I can’t believe that we are already being flooded with Christmas beauty ads… it seems like just yesterday when we were posting 2011 New Year resolutions (by the way, I have managed to break every single one of mine. What about you?)!

Anyway, talking of Christmas beauty campaigns, there are some truly gorgeous ones out there this year and they seem to be divided into three clear trends – Grown Up Glam, Pretty Doll and Metallic Moments – which is what we will be wearing this season in one way or the other. And where better to draw inspiration than the sumptuous, perfectly on-trend looks created by the beauty maestros themselves, so let’s take a look.

Striking makeup, bold eyes or deep berry lips and immaculate hair… this is party-going for the chic and sophisticated. Inspired by the Northern Lights, Lloyd Simmonds, Creative Director of Makeup at YSL Beauté, has produced a glamorous evening look for Christmas. He said: “The Aurora Borealis, or Northern Lights, are incredibly vivid and I have many memories of witnessing this magical spectacle from my childhood. They inspired me to create this collection of intense colours, shot through with violet and midnight blue and sprinkled with silvers of pearl, like a star-filled night.” The print campaign reinforces a party mood, with the model wearing a striking violet eye makeup look with the burgundy and deep blue shades of the YSL Boreal Palette Arctic Night blended together to create the violet shade. This is counter-balanced with YSL Rouge Volupté No. 3
and YSL Golden Gloss No. 56

on the lips and YSL Blush Radiance No. 7 on cheeks. Tyen, Creative Director of Dior Makeup, has reinterpreted the spirit of Dior’s grand ball gowns into a sophisticated beauty look. The model is dressed in a black, sheer gown, accessorised with a large pearl cocktail ring on her finger. She poses coyly, her hand obscuring her face, like a mask – mystery and seduction rolled into one. Divine! Shot to resemble a portrait painting, Giorgio Armani’s print campaign for the White Night Christmas makeup is sexy and seductive. Linda Cantello, international makeup artist for Giorgio Armani, has created an almost-ethereal look with vivid red lips set against a luminous complexion. The model poses in a simple black, strapless dress with her hair gelled and combed back for an androgynous edge. Drenched in gold and silver, glamour is just a shimmering brush stroke away!

Model Natalia Vodianova stars in Guerlain’s new Christmas collection, created by Creative Director Olivier Echaudemaison. He said of the look: “Natalia is its heroine once again. Her beauty lightly caressed by clouds of gold, her eyes elongated by tapered eyeliner punctuated with a dot for an Asian touch, her childlike, red mouth softened with a wash of top coat in the same precious metal.” Created by Peter Philips, creative director of Chanel make-up, the Éclats du Soir de Chanel print campaign stars Polish model Monika Jagaciak. She is dressed in a black outfit with a gold corsage on her neck. The piece de resistance however, are her eyes – filled in with the new Illusion d’Ombre in Apparence, which is a symphony of gold with bronze reflections, and then smoked out with the Regard Signé de Chanel Eyeshadow Quad in Harmonie du Soir. Clarins has created a youthful look, with crushed berry lips and smoky brown eyes for the Odyssey Eye Quartet Mineral Palette, which form the cornerstone of their Christmas makeup collection. The model is dressed in a green, Grecian-style gown with her hair wrapped into a plaited band across the head. 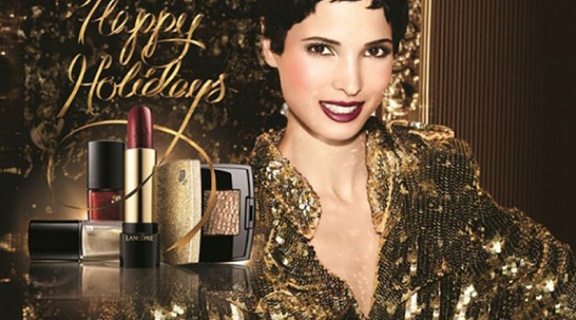 Lancôme’s colour collection is a medley of stunningly beautiful metallics and sequins and garnet and gold – from the model’s wardrobe to the makeup. Luxury at its bling-iest!

Would you rather be playful and a little bit eccentric? Look out for these cute, girly offerings!

Shu Uemura has collaborated with fashion maestro Karl Lagerfeld to create a 17-piece makeup line this season. At the centre of it all is the Mon Shu Girl – the black-bobbed, ruby-eyed, Uma Thurman-meets-Manga character that Lagerfeld sketched to symbolise the line’s irreverent “Eastern, mysterious, modern” aesthetic. As well as selecting the colours and directing the packaging design, the fashion designer also shot the ad campaign. The make-up, by Kakuyasu Uchiide, International Artistic Director of Shu Uemura, is fun and theatrical with green eyes, dramatic lashes, rosy cheeks and red lips. Photographed by Pascal Raso, Bourjois has produced a playful look with a 1960s vibe. Dressed in a little black dress, the model poses behind a midnight blue background with floating bubbles featuring French architecture, including the Eiffel Tower. Pretty, pretty, pretty! MAC’s Glamour Daze print campaign has a pretty boudoir feel, with doll-like make-up and hair. The model is dressed in a baby pink outfit that blends with the decor. Perfect for playful evenings that morph into seductive nights. The Beauty Gypsy’s last minute Christmas gift guide for literally everyone on your list: Part 1