You are here: Home / Fashion / Why I didn’t really like Karl Lagerfeld

I have had a love-hate relationship with Karl Lagerfeld’s philosophy and pronouncements since the time I started looking at fashion sans rose-tinted glasses.

“No one wants to see curvy women.” Really?

“It would have been difficult to have an ugly daughter.” Honestly?

“There’s something boring about people who have to go to an office for a living.” Umm?

“These are fat mummies sitting with their bags of crisps in front of the television, saying that thin models are ugly. Fashion is about dreams and illusions, and no one wants to see round women.” So we are still on that track, are we?

For someone to whom Mars chocolates and Kettle Salt & Vinegar crisps definitely taste better than skinny feels, and who finds it a chore to get out of sweatpants on a good day, it did nothing to endear me to the man who succeeded my favourite fashion designer at one of the most iconic houses in the world.

But away from the controversial, provocative, almost quasi-human android that he appeared to be, there was his fashion genius. There have been few figures in fashion who have had this kind of impact on the international landscape. For so many years. Lagerfeld took the legacy of Coco Chanel – the LBD, tweed jackets, the 2.55 bag, quilted leathers, large pearls, OTT costume jewellery, two-toned ballerina shoes – and rejuvenated them for every era since the 1980s.

He understood the power of street culture and integrated it into the fashion house’s DNA, without ever losing the history of chic-ness. I didn’t like his grunge years but nobody can deny their impact on both fashion history and pop culture. He rebranded Chanel from a historical-but-dull-and-bourgeois brand to something that the millennials covet. He was a fashion and marketing genius, who brought excitement to the runways and our lives at least eight times a year. He supersized the fashion show, and brought theatre to the runways. In short, he rejuvenated fashion.

“When I was younger I wanted to be a caricaturist; in the end I’ve become a caricature.” And therein lay his genius. Understanding the power of a uniform, just like his predecessor.

“Fashion is like music, there are so many notes… You need to play around with them. We all have to make our own tune.” Karl Lagerfeld definitely made his own tune. But now the music has stopped, and the world is silent.

What you didn’t know about Karl Lagerfeld

He drank nothing but Diet Coke. Right from the moment he woke up.

He doused his hair in Klorane dry shampoo to keep it looking snow white!

He avoided sugar like the plague, for fear of putting on weight.

He was an avid fan of supplements, religiously getting blood tests done every year to have his doctor custom-make them. And he kept them in a silver container from the 1920s.

He slept on crisp, perfumed French linen. And it had to be changed everyday.

The secret behind the ponytail? He didn’t like hair getting into his face. And since he didn’t like getting his hair cut, that would definitely be a problem.

The gloves? To protect his hands from the sun.

He kept all his skincare in a fridge in the bathroom. #lifegoals

He often sketched his designs using makeup pencils and lipsticks. Which led to his makeup collaboration with Shu Uemura, where I met him for the first time.

He was a voracious reader, and his Paris apartment had a library of 300,000+ books.

What’s your take on Karl Lagerfeld? Provocative and unreal? Or genius and genuine? 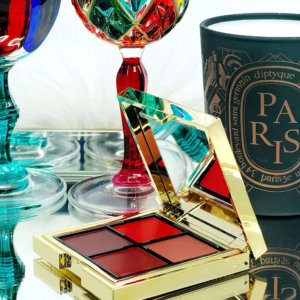